Over the past week, Zilliqa saw its price go down by -6.47%. It is below its 20 day moving average by 7.9%, so it’s somewhat away. Zilliqa’s bullish momentum, based on its distance from its 20 day moving average, is roughly middle-of-the-pack relative to the cryptos we’re tracking. Now when considering volatility, Zilliqa is more prone to sizable price moves than 58% of coins in our index, so it’s volatilty is about what you’d expect for a cryptocurrency in our index. Looking ahead, if the upcoming week mirrors the volatility of three past three weeks, the price range for Zilliqa in US dollars is expected to be between $0.006040342 and $0.008515058. 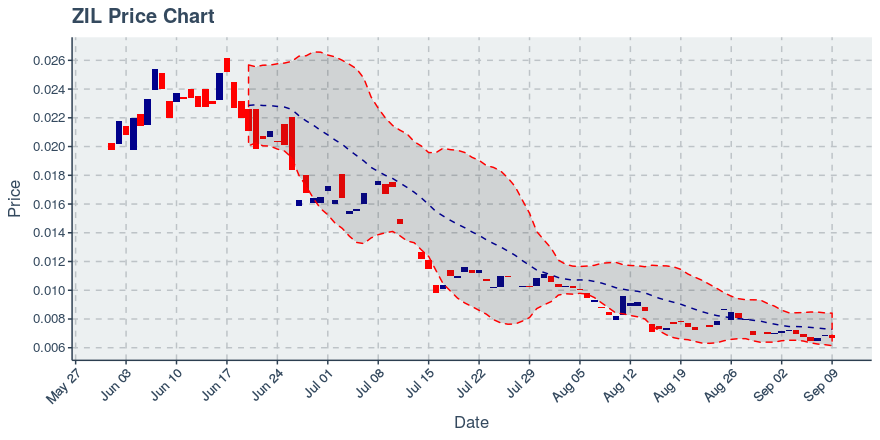 Over the past week, Zilliqa saw its daily volume range between 24,748,274 and 114,614,229 units of its own currency. Looking back over past 21 days, the trend in volume does not have a clear direction, while the price trend is clearly down. Over the past week, Zilliqa saw its trading turnover — which we define as average daily trading volume divided by circulating supply — register at 1.08%. Its trading turnover percentage is higher than about 63.1% of the coins we’re tracking, so it’s above average and thus will have enough liquidity for many investors/traders.

Zilliqa saw the number of wallets holding its coin go from 33,814 to 33,786 over the past week — a change of -0.08%. As for overall transactions, they increased from 419,969 to 420,120 — an increase of 0.04%. The combined engagement growth rate (growth rate in holders plus growth rate in transfers) of Zilliqa is thus at -0.04% which, relatively speaking, is ahead of 3.67% of the cryptocurrencies we’re tracking. This growth rate suggests the coin’s usage is not growing much at all.

Zilliqa currently has 18 public repositories on GitHub, with the oldest one now 1.93 years young. Its most recent public update was within the past day, which is pretty good, as it suggests the coin is still under active and rapid technical development. Zilliqa’s public repos now have 1186 which is pretty good, relatively speaking; specifically, that’s more than 67 % of the top 100 coins we’re looking at. The coin has 215 total outstanding issues across all 18 of its public repositories on GitHub. Relative to the number of watchers it has, though, its open issues count is a bit below average, and thus potentially concerning. We view the ratio of open issues on Zilliqa’s GitHub repos relative to the number of developers who follow its repos as a way to quantitatively assess the health of a coin’s software development processes, and for Zilliqa we see that it fares better than only 35% of the coins we group Zilliqa in.

We found one link over the past week about Zilliqa that we thought was especially worth sharing. If possible we included a brief excerpt from the article — be sure to click through for the entire piece.

Zilliqa announced as flagship customer of the An

The Ankr DCCN allows public blockchain nodes to operate through the Ankr cloud, while maintaining the quality of the cloud, which is comparable to the traditional cloud, while removing any single point of failure by its distributed nature….The aim is to eventually host Zilliqa’s entire mainnet of (currently) 2,320 nodes, on the Ankr distributed cloud infrastructure….Moreover, you can also benefit of the advantages of the Ankr cloud.

7th October 2019
We use cookies to ensure that we give you the best experience on our website. If you continue to use this site we will assume that you are happy with it.OkPrivacy policy