Since last week, True USD’s price went down by 0%. It is above its 20 day moving average by 0.19%, which is quite close. True USD’s bullish momentum, if assessed by its distance from its 20 day moving average, is roughly middle-of-the-pack relative to the cryptos we’re tracking. Now when considering volatility, True USD is more prone to sizable price moves than 1% of coins in our index, so this coin might not move much — something traders and investors will certainly want to keep in mind. If volatility over the past three weeks is any indication of what’s to come, we can expect True USD to bounce between 0.9993649 and $1.004805 US dollars per coin. 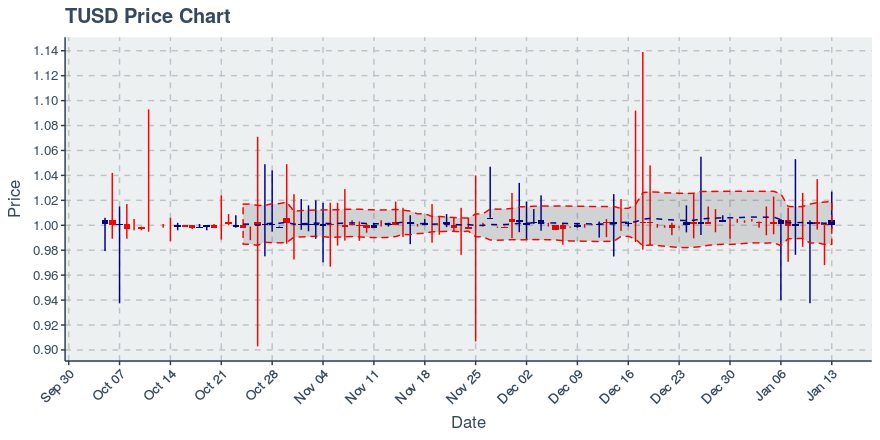 In the week prior, the daily volume for TrueUSD has ranged between 41,879.55 and 876,821.2 currency units. Looking back over past 21 days, the trend in volume,like the trend in price, is choppy and does not reveal a clear direction. The past 7 days saw TrueUSD’s trading turnover — meaning the percentage of its available supply that was traded — come in at 0.33%. Its trading turnover percentage is higher than about 30.23% of the coins we’re tracking, so it’s below average, and so there may be some risk that traders/investors have difficulty in getting in and out of positions.

True USD saw the number of wallets holding its coin go from 27,786 to 27,215 over the past week — a change of -2.05%. And in regards to cumulative transactions logged on the blockchain, they went from 484,125 to 494,725, which amounts to a change of 2.19%. True USD’s combined growth rate — meaning the sum of its growth rate in holders and transactions — is 0.14% which puts it ahead of 49.40% of the coins in our index. One interpretation of this may be that the coin’s weekly growth in engagement is fairly mediocre.

At the moment, TrueUSD has 13 repositories open to the public on GitHub, with the oldest one now being 2.09 years young. The last recorded update to its public repositories was more than a week ago which is potentially concerning; more than a week without an update may suggest development is too slow. TrueUSD’s repos that are visible to the public collectively have 145 watchers — that’s more than only 35 % of the 100 similar coins in our index. The coin has 13 total outstanding issues across all 13 of its public repositories on GitHub. Its number of watchers, when viewed against its open issues count, is fairly mediocre. We consider the GitHub open issue/watcher ratio as a potential indicator of the healthiness of a coin’s software development process, and for TrueUSD we see that its issue/watcher ratio looks healthier than 55% of similar coins in our index.

We found one link over the past week about TrueUSD that we thought was especially worth sharing. Where available, we included a snippet of the article that we thought might be interesting.