Bitcoin is down about 2.19% from the previous day, putting its price at $9,419.52 US dollars at the time of this writing. The down day for Bitcoin yesterday was a reversal from the day before it. Price now stands at 11.98% above its 20 day moving average, and over the past two weeks, price has been in an an up trend. On the other hand, if you are a rangebound trader seeking a range for Bitcoin to bounce between, you might find a lower boundary at $6,856.32 USD and an upper boundary at $9,967.03 USD. In terms of its overall importance in the cryptocurrency market, Bitcoin’s current market capitalization is $166.24 billion US dollars, which is about 66.99% of the market capitalization of all cryptocurrencies. It may be worth paying attention to the trend in Bitcoin’s dominance; the currency’s dominance has been going up gradually, as it has reported an average daily gain of 0.18% the past two weeks. A gain in dominance may suggest cryptocurrency activity is consolidating on the Bitcoin blockchain, and that Bitcoin’s chances for long-term survival are thus enhanced. 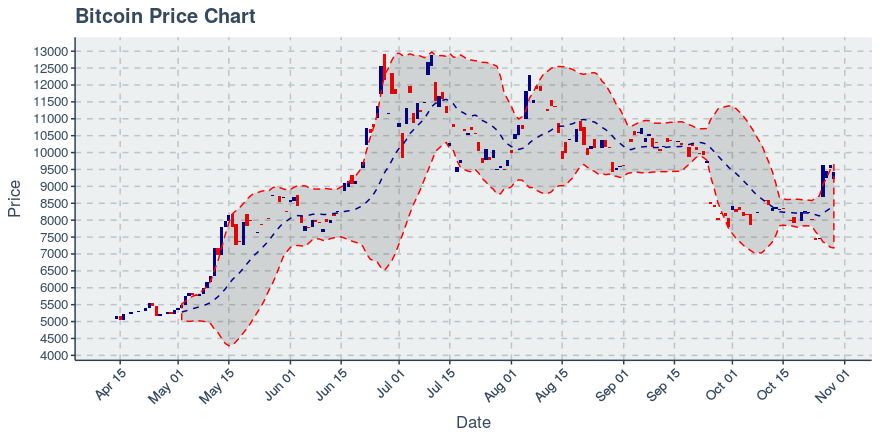 307,953 transactions were added to the Bitcoin blockchain in the previous day. Regarding growth in actual usage of the blockchain for transactions, observe that over the past 7 days daily transactions have fallen by about 6.02%, though it should be noted this past week the trend should be described as not clear — at least on a two-week basis. Bitcoin may end up functioning as a store of value if it does not increase the number of daily transactions occurring on its chain. In terms of transaction fees, the average cost for sending Bitcoin yesterday ended up being approximately $1.16 US dollars. Transaction fees have been growing by approximately 69.97% per week, while the average transaction size is up 60.65% in US dollars. Last but certainly not least, Bitcoin’s hash rate continues to bounce around on a 30 day basis, rising about 0.07% per day. A trend in hash rate that is unclear suggests that mining is becoming harder to interpret, and that the chain is thus being something to keep an eye on. As such, this might not enable Bitcoin to attract more high value transactions.

14th October 2019
We use cookies to ensure that we give you the best experience on our website. If you continue to use this site we will assume that you are happy with it.OkPrivacy policy