Bitcoin is down about 0.73% from the previous day, putting its price at $9,550.6 US dollars at the time of this writing. Yesterday’s down day is a reversal of the day before it. In terms of trend, though, note that the current price is now 14.39% above its 20 day moving average, and is currently in an unclear trend over the past 14 days. On the other hand, if you are a rangebound trader seeking a range for Bitcoin to bounce between, you might find a lower boundary at $7,159.5 USD and an upper boundary at $9,538.28 USD. In terms of its overall importance in the cryptocurrency market, Bitcoin’s current market capitalization is $172.57 billion US dollars, which is about 67.82% of the market capitalization of all cryptocurrencies. Bitcoin’s dominance has been trending up gradually, averaging a upward move of 0.15% each day over the past two weeks. A upward move in dominance may suggest the case for altcoins is getting weaker, and thus participants of all kinds — investors, merchants, application developers — may flock to Bitcoin in increasing numbers. 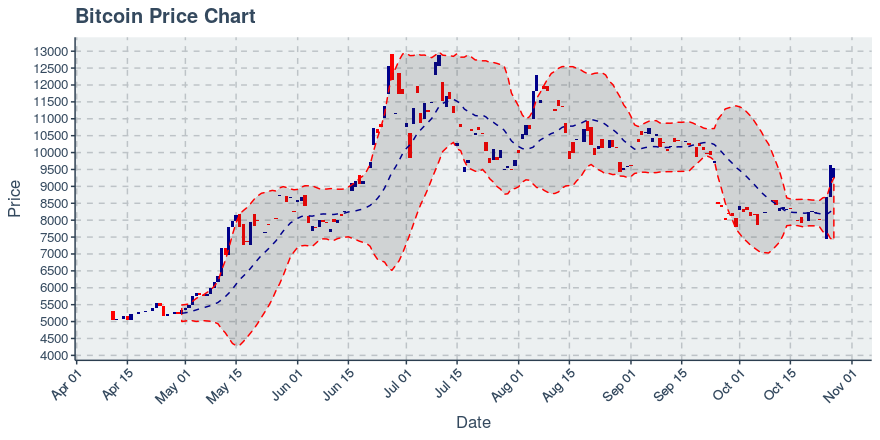 256,253 transactions were recorded on the Bitcoin blockchain yesterday. Regarding growth in actual usage of the blockchain for transactions, observe that over the past 7 days daily transactions have declined by about 0.61%, though it should be noted this past week the trend should be described as not clear — at least on a two-week basis. If Bitcoin does not grow transactions, it may need to derive its value as a money to protect against political turmoil. Yesterday, Bitcoin’s average fee per transaction came in at $1.45. The average transaction fee has been increasing at a rate of about 25.22% per week, but the average amount of money sent in transactions, in US dollars, is up 19.87% week over week. In terms of how much computing power Bitcoin is using, over the past 30 days its hash rate has continued to bounce around , ultimately growing daily by approximately 0.18%. Ultimately, the security of Bitcoin is being a point to bear in mind, because the hash rate trend is unclear — which implies the trend in mining strength is now more uncertain in a way. From this perspective, this behavior may not provide Bitcoin with the ability to earn greater trust from developers and investors alike.

20th December 2019
We use cookies to ensure that we give you the best experience on our website. If you continue to use this site we will assume that you are happy with it.OkPrivacy policy