In the week prior, the price for LEO Token went down by -98.16%. It is below its 20 day moving average by 98.09%, so it’s very far away. LEO Token’s bullish momentum, determined by its distance from its 20 day moving average, is among the worst compared to other cryptocurrencies, and thus may indicate the coin has swung too far and too fast — and may thus be due for consolidation or a bullish correction. Regarding volatility, LEO Token is more volatile than roughly 91% of coins in our index, so bear that in mind if you decide to trade it. Based on volatility over the past three weeks, we can expect LEO Token to experience a price range in US dollars between 0.6066696 and $1.69092. 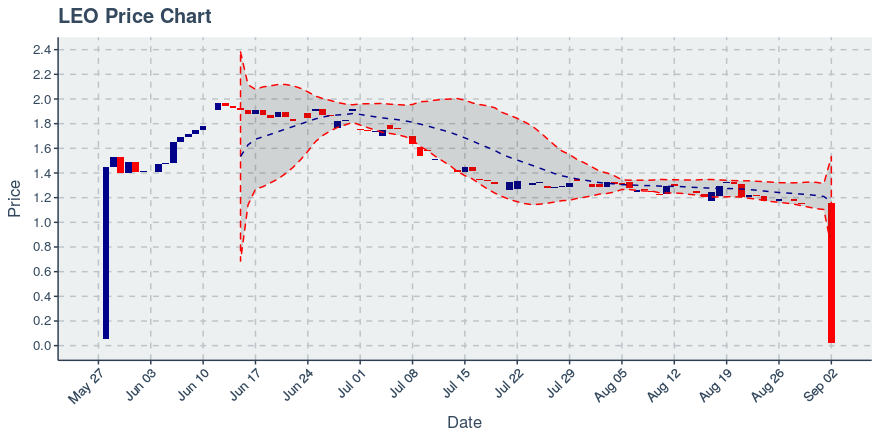 In the week prior, the daily volume for UNUS SED LEO has ranged between 41,229.4 and 2,278,858 currency units. Over the past three weeks, the trend in volume does not have a clear direction, while the price trend is clearly down. The past 7 days saw UNUS SED LEO’s trading turnover — meaning the percentage of its available supply that was traded — come in at 0.1%. Its turnover rate is more than approximately 14.12% of the cryptocurrencies in our index, so it’s well below average; this coin may be hard to get into and out of, and thus is suitable only for those interested in holding and exiting slowly and patiently.

LEO Token saw the number of wallets holding its coin go from 1,798 to 1,811 over the past week — a change of 0.72%. And in regards to cumulative transactions logged on the blockchain, they went from 17,455 to 17,701, which amounts to a change of 1.41%. This translates to a combined engagement growth rate of 2.13% for LEO Token — which is higher than 87.17% of the cryptocurrencies we’re reporting on. One interpretation of this may be that the coin may be on track to getting and sustaining actual usage.