In the week prior, the price for LEO Token went down by -10.6%. It is below its 20 day moving average by 4.39%, so it’s slightly away. LEO Token’s bullish momentum, determined by its distance from its 20 day moving average, is roughly middle-of-the-pack relative to the cryptos we’re tracking. Regarding volatility, LEO Token is more volatile than roughly 4% of coins in our index, so this coin might not move much — something traders and investors will certainly want to keep in mind. Based on volatility over the past three weeks, we can expect LEO Token to experience a price range in US dollars between 1.151851 and $1.335349. 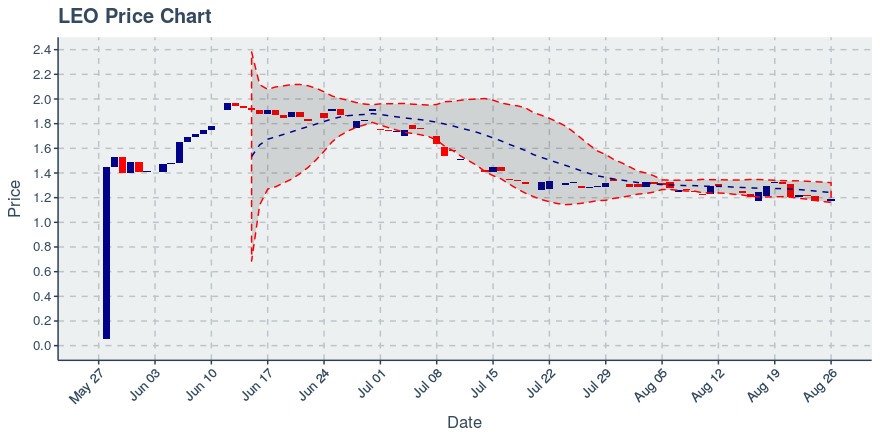 In the span of the preceding 7 days, UNUS SED LEO’s daily volume, in terms of its own unit of currency, has fluctuated between 772,806.2 and 2,875,314. Looking back over past 21 days, volume has steadily risen, but price has been declining. The past 7 days saw UNUS SED LEO’s trading turnover — meaning the percentage of its available supply that was traded — come in at 0.16%. Its trading turnover percentage is higher than about 14.29% of the coins we’re tracking, so it’s well below average; this coin may be hard to get into and out of, and thus is suitable only for those interested in holding and exiting slowly and patiently.

Over the past week, LEO Token saw its holders go from 1,781 to 1,798, an increase of 0.95%. In terms of blockchain-recorded transactions made by these wallets since their inception, that number changed from 17,141 to 17,455, which translates to growth of 1.83% for the week. LEO Token’s combined growth rate — meaning the sum of its growth rate in holders and transactions — is 2.78% which puts it ahead of 88.84% of the coins in our index. This could indicate that the coin may be on track to getting and sustaining actual usage.