Bitcoin’s price at the moment is clocking in at $9,500.24, which means that since yesterday, it is down about 5.72%. The down day for Bitcoin yesterday was a reversal from the day before it. Price now stands at 10.47% below its 20 day moving average, and over the past two weeks, price has been in an an unclear trend. Given that its distance from its 20 day moving average of $10,610.68 is somewhat far, it may mean that prospective buyers may wish to wait for this gap to shorten a bit before jumping in. Alternatively, for those interested in trading ranges that Bitcoin bounces between, its current two week trading range in US dollars is between $9,780.25 and $11,441.11. The currency’s market cap is now at $169.59 billion US dollars, and it’s market dominance — the percent of the entire amount of capital invested in cryptocurrencies that belong to Bitcoin — is at 64.12%. Bitcoin’s dominance has been trending down gradually, averaging a fall of -0.17% each day over the past two weeks. A fall in dominance may suggest a growing opportunity for investing in other coins, and thus multiple cryptocurrencies may end up succeeding. 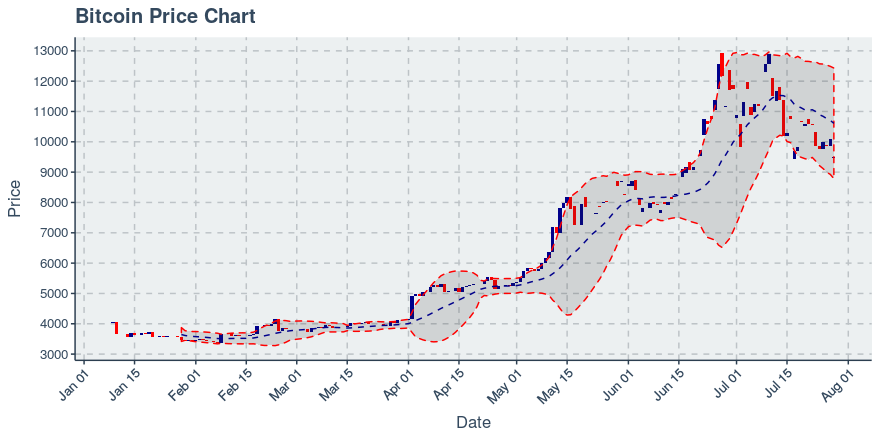 283,892 transactions were added to the Bitcoin blockchain in the previous day. The trend in daily transactions is not clear, though it should be noted that transactions have fallen by about -5.26% over the past week. Ultimately, if the currency does not succeed in growing transactions on its chain, its primary utility may be as a store of value. As for Bitcoin’s transaction fees, the average transaction fee yesterday was $1.42 US dollars. The size of the typical transaction on Bitcoin’s blockchain is down 29.9% in US dollars; meanwhile, the fee for sending transactions has been decreasing by 17.22% per week. The decline in Bitcoin’s transaction fee is welcome, but the decline in average transaction value may hinder the narrative of Bitcoin as a currency for large transactions. In terms of how much computing power Bitcoin is using, over the past 30 days its hash rate has continued to bounce around , ultimately growing daily by approximately 0.16%. Ultimately, the security of Bitcoin is something to pay attention to, because the hash rate trend is unclear — which implies the trend in mining strength is now harder to understand. As such, this might not enable Bitcoin to attract more high value transactions.