In the week prior, the price for IOS token went down by -2.34%. It is below its 20 day moving average by 4%, so it’s fairly close. IOS token’s bullish momentum, if assessed by its distance from its 20 day moving average, is roughly middle-of-the-pack relative to the cryptos we’re tracking. Now when considering volatility, IOS token is more prone to sizable price moves than 41% of coins in our index, so it’s volatilty is about what you’d expect for a cryptocurrency in our index. If volatility over the past three weeks is any indication of what’s to come, we can expect IOS token to bounce between 0.007809329 and $0.01069077 US dollars per coin. 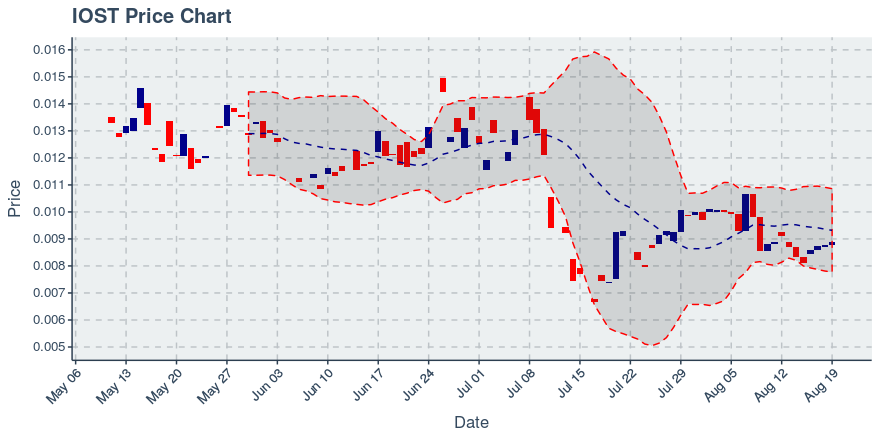 Over the past week, IOST saw its daily volume range between 20,664,327 and 102,502,666 units of its own currency. In the three weeks prior, the trend in volume does not have a clear direction, while the price trend is clearly down. The past 7 days saw IOST’s trading turnover — meaning the percentage of its available supply that was traded — come in at 0.48%. This turnover rate is higher than approximately 41.57% of the cryptocurrencies we monitor, which means it’s middle-of-the-pack; investors/traders may thus wish to consider their liquidity requirements to make sure the coin matches their needs and their expected trading volume.

IOST currently has 30 public repositories on GitHub, with the oldest one now 1.39 years young. Its last public update to any of its repositories was within the past week which is not bad, as the coin is still being updated routinely. IOST’s public repositories collectively have a total of 662 watchers, which is pretty good, relatively speaking; specifically, that’s more than 68 % of the top 100 coins we’re looking at. The coin has 50 total outstanding issues across all 30 of its public repositories on GitHub. Relative to the number of watchers it has, though, its open issues count is fairly mediocre. We consider the GitHub open issue/watcher ratio as a potential indicator of the healthiness of a coin’s software development process, and for IOST we see that its issue/watcher ratio looks healthier than 55% of similar coins in our index.

The top theme being discussed about IOST in the past week is listed below. If possible we included a brief excerpt from the article — be sure to click through for the entire piece.

13th January 2020
We use cookies to ensure that we give you the best experience on our website. If you continue to use this site we will assume that you are happy with it.OkPrivacy policy