Since last week, HedgeTrade’s price went down by -4.16%. It is below its 20 day moving average by 2.27%, so it’s fairly close. HedgeTrade’s bullish momentum, determined by its distance from its 20 day moving average, is roughly middle-of-the-pack relative to the cryptos we’re tracking. Now when considering volatility, HedgeTrade is more prone to sizable price moves than 17% of coins in our index, so this coin might not move much — something traders and investors will certainly want to keep in mind. Based on volatility over the past three weeks, we can expect HedgeTrade to experience a price range in US dollars between 0.6704897 and $0.8760603. 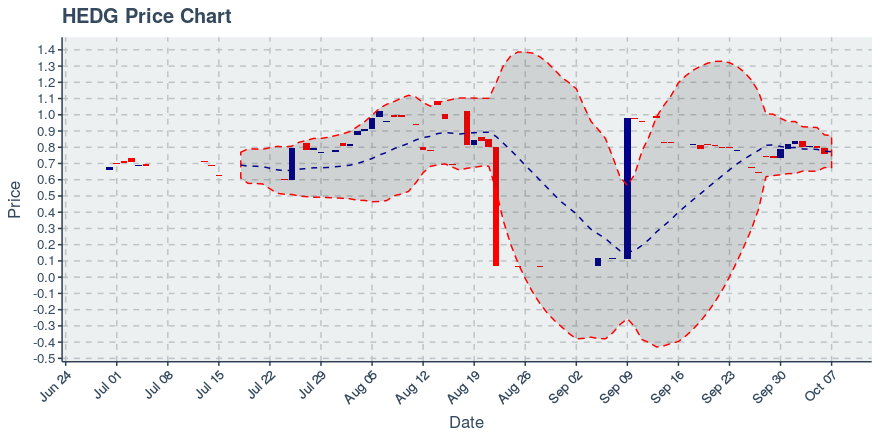 Over the past week, HedgeTrade saw its daily volume range between 42,557.01 and 232,905.5 units of its own currency. Over the past three weeks, volume has a clearn upwards trend, but the trend in price is not as clear. HedgeTrade experienced a turnover rate of about 0.06% over the past week, which means that is the percent of its available money supply that is traded daily. Its trading turnover percentage is higher than about 8.14% of the coins we’re tracking, so it’s well below average; this coin may be hard to get into and out of, and thus is suitable only for those interested in holding and exiting slowly and patiently.

The number of wallets holding HedgeTrade went from 1,375 to 1,380 in the past week, marking a change of 0.36%. In terms of blockchain-recorded transactions made by these wallets since their inception, that number changed from 14,840 to 15,368, which translates to growth of 3.56% for the week. The combined engagement growth rate (growth rate in holders plus growth rate in transfers) of HedgeTrade is thus at 3.92% which, relatively speaking, is ahead of 91.38% of the cryptocurrencies we’re tracking. One interpretation of this may be that the coin may be on track to getting and sustaining actual usage.

At the moment, HedgeTrade has 3 repositories open to the public on GitHub, with the oldest one now being 1.65 years young. Its most recent public update was more than a week ago which is potentially concerning; more than a week without an update may suggest development is too slow. HedgeTrade’s public repos now have 5 which is very bad on a relative basis; it bests only 16 % of the 100 similar coins in our index. The coin has 1 issues reported across its public repositories. Relative to the number of watchers it has, though, its open issues count is a bit below average, and thus potentially concerning. We view the ratio of open issues on HedgeTrade’s GitHub repos relative to the number of developers who follow its repos as a way to quantitatively assess the health of a coin’s software development processes, and for HedgeTrade we see that it fares better than only 28% of the coins we group HedgeTrade in.

4th November 2019
We use cookies to ensure that we give you the best experience on our website. If you continue to use this site we will assume that you are happy with it.OkPrivacy policy