Since last week, Dai’s price went down by -0.3%. It is below its 20 day moving average by 0.11%, which is quite close. Dai’s bullish momentum, if assessed by its distance from its 20 day moving average, is above average relative to our index of cryptocurrencies. Regarding volatility, Dai is more volatile than roughly 1% of coins in our index, so this coin might not move much — something traders and investors will certainly want to keep in mind. Looking ahead, if the upcoming week mirrors the volatility of three past three weeks, the price range for Dai in US dollars is expected to be between $1.001279 and $1.006921. 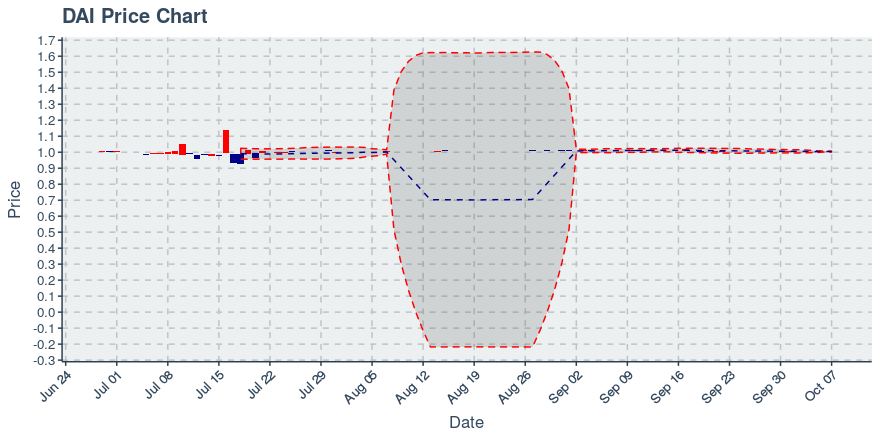 Over the past week, Dai saw its daily volume range between 12,067.27 and 135,412.9 units of its own currency. In the three weeks prior, volume has steadily declined, but the trend in price is not as clear one way or the other. The past 7 days saw Dai’s trading turnover — meaning the percentage of its available supply that was traded — come in at 0.09%. Its turnover rate is more than approximately 10.47% of the cryptocurrencies in our index, so it’s well below average; this coin may be hard to get into and out of, and thus is suitable only for those interested in holding and exiting slowly and patiently.

Over the past week, Dai saw its holders go from 153,795 to 154,110, an increase of 0.20%. And in regards to cumulative transactions logged on the blockchain, they went from 2,272,012 to 2,336,252, which amounts to a change of 2.83%. The combined engagement growth rate (growth rate in holders plus growth rate in transfers) of Dai is thus at 3.03% which, relatively speaking, is ahead of 89.71% of the cryptocurrencies we’re tracking. This growth rate suggests the coin may be on track to getting and sustaining actual usage.

Dai currently has 60 public repos on GitHub, with the oldest one clocking in at 4.08 years young. Its last public update to any of its repositories was within the past day, which is pretty good, as it suggests the coin is still under active and rapid technical development. Maker’s public repos now have 1196 which is pretty good, relatively speaking; specifically, that’s more than 70 % of the top 100 coins we’re looking at. The coin has 220 outstanding issues in the backlog awaiting to be addressed by the core development team. Relative to the number of watchers it has, though, its open issues count is a bit below average, and thus potentially concerning. We view the ratio of open issues on Maker’s GitHub repos relative to the number of developers who follow its repos as a way to quantitatively assess the health of a coin’s software development processes, and for Maker we see that it fares better than only 34% of the coins we group Maker in.

We found 2 links over the past week about Dai that we thought were especially worth sharing. Where available, we included a snippet of the article that we thought might be interesting.