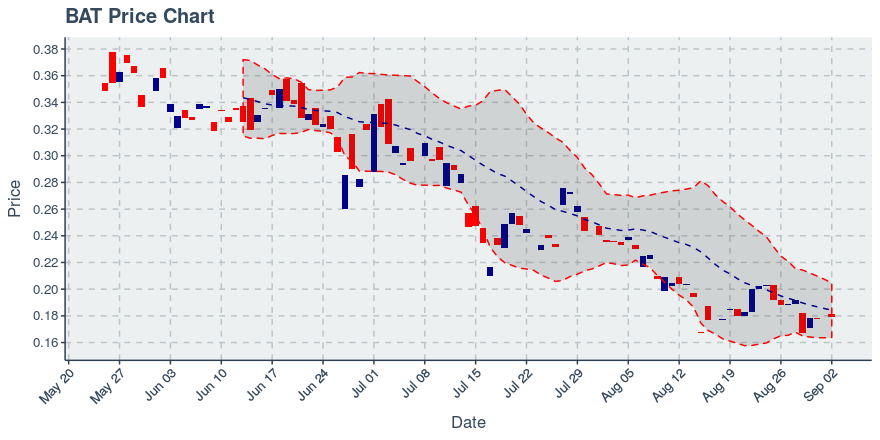 In the week prior, the daily volume for Basic Attention Token has ranged between 1,209,272 and 9,176,552 currency units. Looking back over past 21 days, the trend in volume,like the trend in price, is choppy and does not reveal a clear direction. The past 7 days saw Basic Attention Token’s trading turnover — meaning the percentage of its available supply that was traded — come in at 0.44%. Its trading turnover percentage is higher than about 50.59% of the coins we’re tracking, so it’s middle-of-the-pack; investors/traders may thus wish to consider their liquidity requirements to make sure the coin matches their needs and their expected trading volume.

Basic Attention Token saw the number of wallets holding its coin go from 183,877 to 185,131 over the past week — a change of 0.68%. And in regards to cumulative transactions logged on the blockchain, they went from 1,253,968 to 1,260,907, which amounts to a change of 0.55%. Basic Attention Token’s combined growth rate — meaning the sum of its growth rate in holders and transactions — is 1.23% which puts it ahead of 82.79% of the coins in our index. One interpretation of this may be that the coin may be on track to getting and sustaining actual usage.

Basic Attention Token currently has 30 public repos on GitHub, with the oldest one clocking in at 2.89 years young. Its most recent public update was within the past week which is not bad, as the coin is still being updated routinely. Basic Attention Token’s public repositories collectively have a total of 255 watchers, which is about average compared to other similar coins; that’s more than approximately 41 % of coins in its index. The coin has 129 outstanding issues in the backlog awaiting to be addressed by the core development team. Its number of watchers, when viewed against its open issues count, is quite poor, and may potentially indicate some concern that the software is at risk of not being updated fast enough. Our hypothesis that the open issue/watcher ratio may be of some value in assessing the healthiness of a coin’s software development process, and for Basic Attention Token, this ratio was better than a mere 7 % of the similar coins we track in our index.

Over the past week, we found 3 links about Basic Attention Token that we found especially interesting. If possible we included a brief excerpt from the article — be sure to click through for the entire piece.