Since last week, Aurora ‘s price went up by 1.5%. It is below its 20 day moving average by 0.65%, so it’s fairly close. Aurora ‘s bullish momentum, based on its distance from its 20 day moving average, is roughly middle-of-the-pack relative to the cryptos we’re tracking. Now when considering volatility, Aurora is more prone to sizable price moves than 48% of coins in our index, so it’s volatilty is about what you’d expect for a cryptocurrency in our index. Looking ahead, if the upcoming week mirrors the volatility of three past three weeks, the price range for Aurora in US dollars is expected to be between $0.01866306 and $0.02343094. 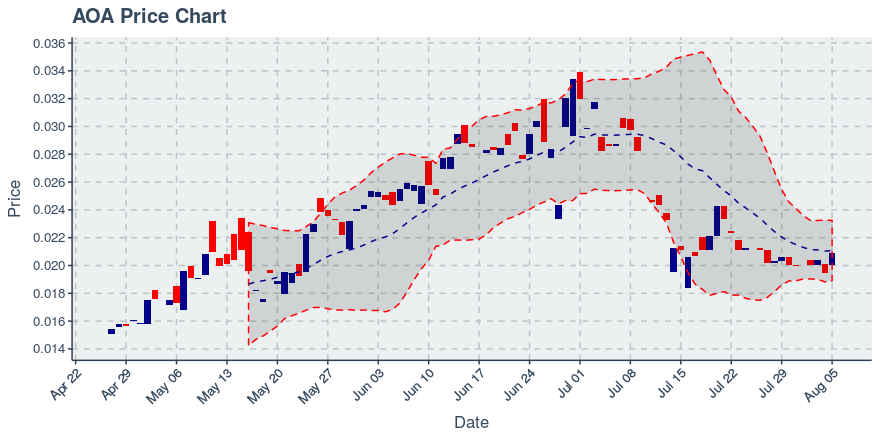 In the week prior, the daily volume for Aurora has ranged between 81,556.78 and 401,946.6 currency units. In the three weeks prior, both price and volume have been declining. Over the past week, Aurora saw its trading turnover — which we define as average daily trading volume divided by circulating supply — register at 0%. Its trading turnover percentage is higher than about 2.08% of the coins we’re tracking, so it’s well below average; this coin may be hard to get into and out of, and thus is suitable only for those interested in holding and exiting slowly and patiently.

Aurora saw the number of wallets holding its coin go from 101,020 to 101,013 over the past week — a change of -0.01%. And in regards to cumulative transactions logged on the blockchain, they went from 122,746 to 122,862, which amounts to a change of 0.09%. This translates to a combined engagement growth rate of 0.08% for Aurora — which is higher than 46.78% of the cryptocurrencies we’re reporting on. This growth rate suggests the coin’s weekly growth in engagement is fairly mediocre.

Aurora currently has 13 public repos on GitHub, with the oldest one clocking in at 1.22 years young. The last recorded update to its public repositories was more than a week ago which is potentially concerning; more than a week without an update may suggest development is too slow. Aurora’s public repositories collectively have a total of 100 watchers, which is below average relative to its peers; that’s more than only 38 % of the 100 similar coins in our index. The coin has 0 total outstanding issues across all 13 of its public repositories on GitHub. Relative to the number of watchers it has, though, its open issues count doesn’t seem like something to worry about. To put the situation in context, Aurora has a better issue/watcher ratio on its GitHub than 87% of similar coins we’re tracking.

We found 2 links over the past week about Aurora that we thought were especially worth sharing. Where available, we included a snippet of the article that we thought might be interesting.

Cannabis Vape Pens Starting to Make a Stir in t

What companies like most about cannabis vape pens is that they come at a huge premium….Some industry experts say cannabis vaping will be the next growth market for cannabis.