Bitcoin is down about 7.23% from the previous day, putting its price at $9,817.38 US dollars at the time of this writing. This is the 3rd consecutive day that Bitcoin has moved down, but the coin’s trend over the past two weeks is unclear. It is currently 8.89% below its 20 day moving average of $10,775.78, which is somewhat close; a climb up to the 20 day moving average may be needed before momentum buyers come in. Alternatively, for those interested in trading ranges that Bitcoin bounces between, its current two week trading range in US dollars is between $9,448.19 and $12,103.37. The currency’s market cap is now at $176.12 billion US dollars, and it’s market dominance — the percent of the entire amount of capital invested in cryptocurrencies that belong to Bitcoin — is at 68.06%. It may be worth paying attention to the trend in Bitcoin’s dominance; the currency’s dominance has been going up gradually, as it has reported an average daily gain of 0.29% the past two weeks. A gain in dominance may suggest cryptocurrency activity is consolidating on the Bitcoin blockchain, and that Bitcoin’s chances for long-term survival are thus enhanced. 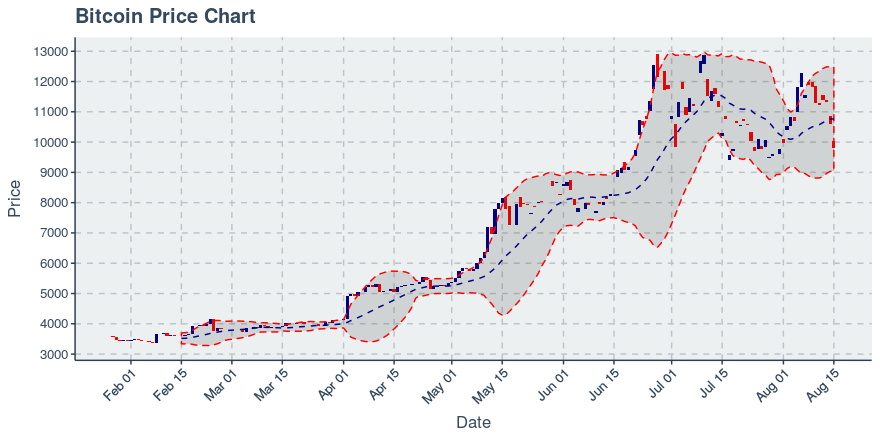 359,997 transactions were added to the Bitcoin blockchain in the previous day. The trend in daily transactions is not clear, though it should be noted that transactions have dropped by about 4.49% over the past week. Bitcoin may end up functioning as a store of wealth if it does not increase the number of daily transactions occurring on its chain. Yesterday, Bitcoin’s average fee per transaction came in at $2.26. Transaction fees have been growing by approximately 59.3% per week, while the average transaction size is up 3.22% in US dollars. Regarding Bitcoin’s hash rate, which serves as a measure of the network’s computational power, it has managed to trend upwards over the past 30 days. It has been gaining daily by a rate of approximately 0.55%. Ultimately, the security of Bitcoin is growing stronger, because the hash rate trend is upwards — which implies the trend in mining strength is now more competitive. As such, this might enable Bitcoin to draw more capital to its chain.

Over the past 30 days, 2.54% of the 556.64 million Bitcoin wallets holding a balance reported a transaction. In terms of engagement, note that the number of monthly active users in Bitcoin has been oscillating by about 7,786.618 per day. The top 1% of Bitcoin wallets hold over 90.61% of the outstanding Bitcoin.