In the week prior, the price for 0x went up by 0.24%. It is above its 20 day moving average by 1.13%, so it’s fairly close. 0x’s bullish momentum, based on its distance from its 20 day moving average, is roughly middle-of-the-pack relative to the cryptos we’re tracking. Now when considering volatility, 0x is more prone to sizable price moves than 10% of coins in our index, so this coin might not move much — something traders and investors will certainly want to keep in mind. If volatility over the past three weeks is any indication of what’s to come, we can expect 0x to bounce between 0.154092 and $0.171028 US dollars per coin. 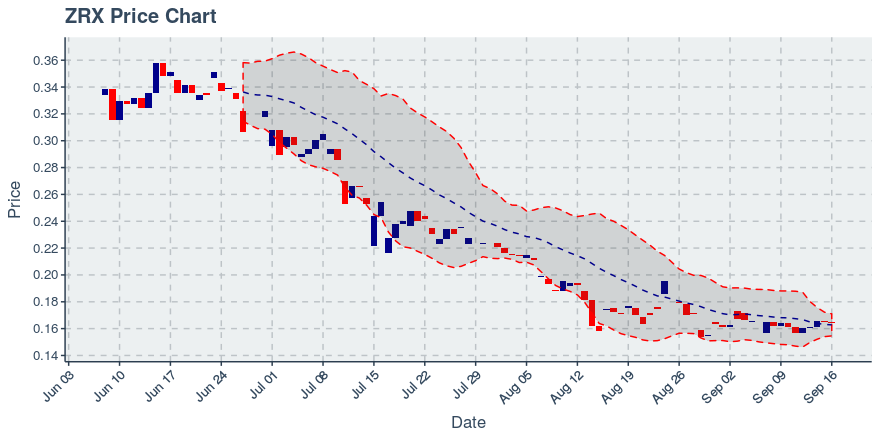 Over the past week, 0x saw its daily volume range between 623,933.6 and 2,976,447 units of its own currency. Looking back over past 21 days, the trend in volume,like the trend in price, is choppy and does not reveal a clear direction. Over the past week, 0x saw its trading turnover — which we define as average daily trading volume divided by circulating supply — register at 0.29%. This turnover rate is higher than approximately 37.21% of the cryptocurrencies we monitor, which means it’s below average, and so there may be some risk that traders/investors have difficulty in getting in and out of positions.

Over the past week, 0x saw its holders go from 106,641 to 107,798, an increase of 1.08%. In terms of blockchain-recorded transactions made by these wallets since their inception, that number changed from 958,434 to 963,026, which translates to growth of 0.48% for the week. The combined engagement growth rate (growth rate in holders plus growth rate in transfers) of 0x is thus at 1.56% which, relatively speaking, is ahead of 84.22% of the cryptocurrencies we’re tracking. This could indicate that the coin may be on track to getting and sustaining actual usage.

At the moment, 0x has 30 repositories open to the public on GitHub, with the oldest one now being 2.36 years young. Its most recent public update was within the past week which is not bad, as the coin is still being updated routinely. 0x’s public repos now have 1915 which is very impressive; that’s more than 82 % of the top 100 coins we compare it to. The coin has 198 total outstanding issues across all 30 of its public repositories on GitHub. Its number of watchers, when viewed against its open issues count, is fairly mediocre. We consider the GitHub open issue/watcher ratio as a potential indicator of the healthiness of a coin’s software development process, and for 0x we see that its issue/watcher ratio looks healthier than 54% of similar coins in our index.

The top theme being discussed about 0x in the past week is listed below. If possible we included a brief excerpt from the article — be sure to click through for the entire piece.