In the week prior, the price for 0x went down by -8.16%. It is below its 20 day moving average by 8.23%, so it’s somewhat away. 0x’s bullish momentum, based on its distance from its 20 day moving average, is pretty far negative compared to the other coins we’re covering, and thus may be due for a correction upwards or some kind of a period of low volatility. Now when considering volatility, 0x is more prone to sizable price moves than 62% of coins in our index, so traders can expect a bit more volatility than usual. Based on volatility over the past three weeks, we can expect 0x to experience a price range in US dollars between 0.1534249 and $0.2316551. 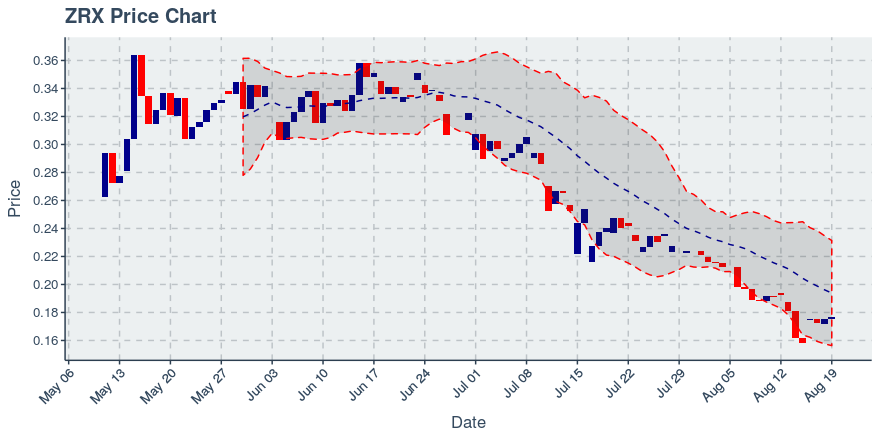 Over the past week, 0x saw its daily volume range between 652,928.5 and 7,717,297 units of its own currency. Over the past three weeks, the trend in volume does not have a clear direction, while the price trend is clearly down. 0x experienced a turnover rate of about 0.5% over the past week, which means that is the percent of its available money supply that is traded daily. Its turnover rate is more than approximately 42.7% of the cryptocurrencies in our index, so it’s middle-of-the-pack; investors/traders may thus wish to consider their liquidity requirements to make sure the coin matches their needs and their expected trading volume.

The number of wallets holding 0x went from 103,890 to 104,325 in the past week, marking a change of 0.42%. In terms of blockchain-recorded transactions made by these wallets since their inception, that number changed from 938,034 to 944,505, which translates to growth of 0.69% for the week. The combined engagement growth rate (growth rate in holders plus growth rate in transfers) of 0x is thus at 1.11% which, relatively speaking, is ahead of 80.86% of the cryptocurrencies we’re tracking. This could indicate that the coin may be on track to getting and sustaining actual usage.

0x currently has 30 public repos on GitHub, with the oldest one clocking in at 2.28 years young. Its last public update to any of its repositories was within the past week which is not bad, as the coin is still being updated routinely. 0x’s public repos now have 1882 which is very impressive; that’s more than 86 % of the top 100 coins we compare it to. The coin has 180 total outstanding issues across all 30 of its public repositories on GitHub. Relative to the number of watchers it has, though, its open issues count is fairly mediocre. We consider the GitHub open issue/watcher ratio as a potential indicator of the healthiness of a coin’s software development process, and for 0x we see that its issue/watcher ratio looks healthier than 49% of similar coins in our index.